“We are excited to serve customers with this state-of-the-art, environmentally friendly facility,” said Robert Haley, LEC operations director. “Our team is well-equipped and highly trained, and I’m pleased that we have begun 24/7 operations.”

“We’re very grateful for the support we’ve received from our investors, employees, suppliers, local and state government leaders and the residents of our community, including hundreds of construction workers. Their cooperation and hard work were critical to our ability to achieve today’s milestone.”

James Dignan, president and CEO of Youngstown Warren Regional Chamber, added, “We are happy to have helped bring this nearly $1 billion investment to the Mahoning Valley. The Lordstown Energy Center has already proven itself to be a good corporate citizen. We look forward to having the company be a part of our community for decades to come.”

Drew Schneider brings nearly 40 years of energy experience to Lordstown Energy Center. A native of Factoryville, Pa. (near Scranton), he served on a U.S. Navy nuclear power submarine for 20 years with deployments to the Indian Ocean and Mediterranean Sea. After his military career, Schneider held positions of increased leadership at Ontelaunee Energy Center (Leesport, Pa.) and Bridgeport Energy (Bridgeport, Conn.), and most recently served as the plant manager for six years at Kleen Energy Systems in Middletown, Conn. 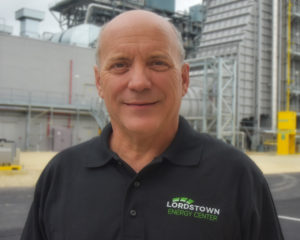 “I’m humbled to be the plant manager and for the opportunity to both lead this state-of-the-art power plant and to become part of the greater Mahoning Valley community,” said Schneider. “It’s an exciting time and I’m honored to lead our dedicated team.”

“Drew is a skilled leader who brings an impeccable safety record to Lordstown Energy Center,” noted Haley. “I’ve known Drew personally for 17 years. He’s very familiar with the technology here and has the operational experience to successfully lead the plant.”

Drew and his wife, Lisa, relocated from Connecticut to the Mahoning Valley last month. The couple has two grown children, two grandchildren and are expecting twin grandchildren soon. In his spare time, Drew enjoys spending time with his family and boating. He’s been an active supporter of the military, American Cancer Society and first responders in all the communities in which his family has lived.